Designer of the Future For Nature Award Shares

Richard van der Koppel is the designer and creator of the annual Future For Nature Awards that the FFN Award winners receive for their outstanding conservation work. Like all things, there is a story behind our Award. Read the blog written by the designer below.

Start of the Design

At the end of 2007, I was called by Future For Nature, asking if I could design an award. He envisioned an award that would incorporate a frog. It was an motivating conversation and during this conversation I saw in broad lines how I wanted to design the award.

The image of the frogs and the glass sphere forced themselves on me. This does not happen often and when it happens it is a good design that only needs to be developed physically. Everything fell perfectly into place. Bart explained what Future For Nature stands for; my design and the idea behind it fitted seamlessly.

The combination of the glass and bronze is powerful yet also fragile. The glass sphere symbolizes the earth that is powerful, but also fragile. The frogs that walk around the globe stand for all life and again reflect their vulnerability. The frog that carries the globe, as Atlas carried the earth, stands firmly on its legs and keeps it in balance. It is symbolic of humanity who can also keep the earth in balance and protect what is vulnerable.

The photo on the left is a first sketch. The frogs are made of brown modeling wax. With this model I designed the molds. The photo on the right is of the first Future For Nature Award. The first Award did not have a pedestal. We wrote the text on the belly of the frog carrying the glass sphere. A year later we added the pedestal under the Award as the FFN Award is used today. 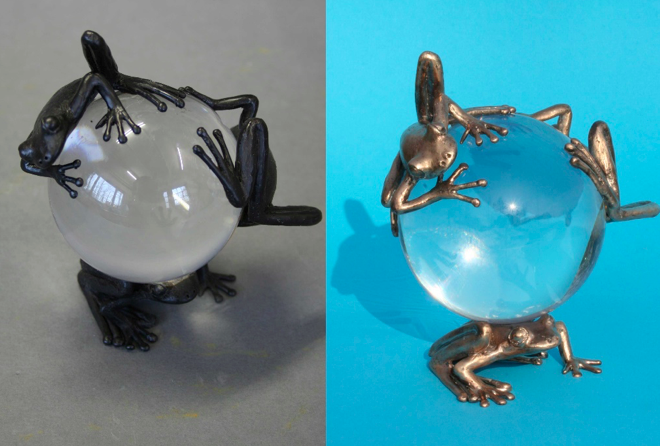 I am still very proud that I have been able to design the Award for Future For Nature and I support this organisation. I have been to all the ceremonies and I think it is one of the nicest and most inspiring days of the year.