The Blue-Throated Macaw and Jaguar are Among the Winners

Translation of the article published by the Dutch newspaper Trouw, original article written by Loïs Verkooijen, published on the 7th of May 2020.

How do you protect the Bolivian Blue-throated Macaw or the Venezuelan jaguar? The Dutch Tjalle Boorsma and the Venezuelan María Fernanda Puerto-Carrillo both won the prestigious Future For Nature Award. 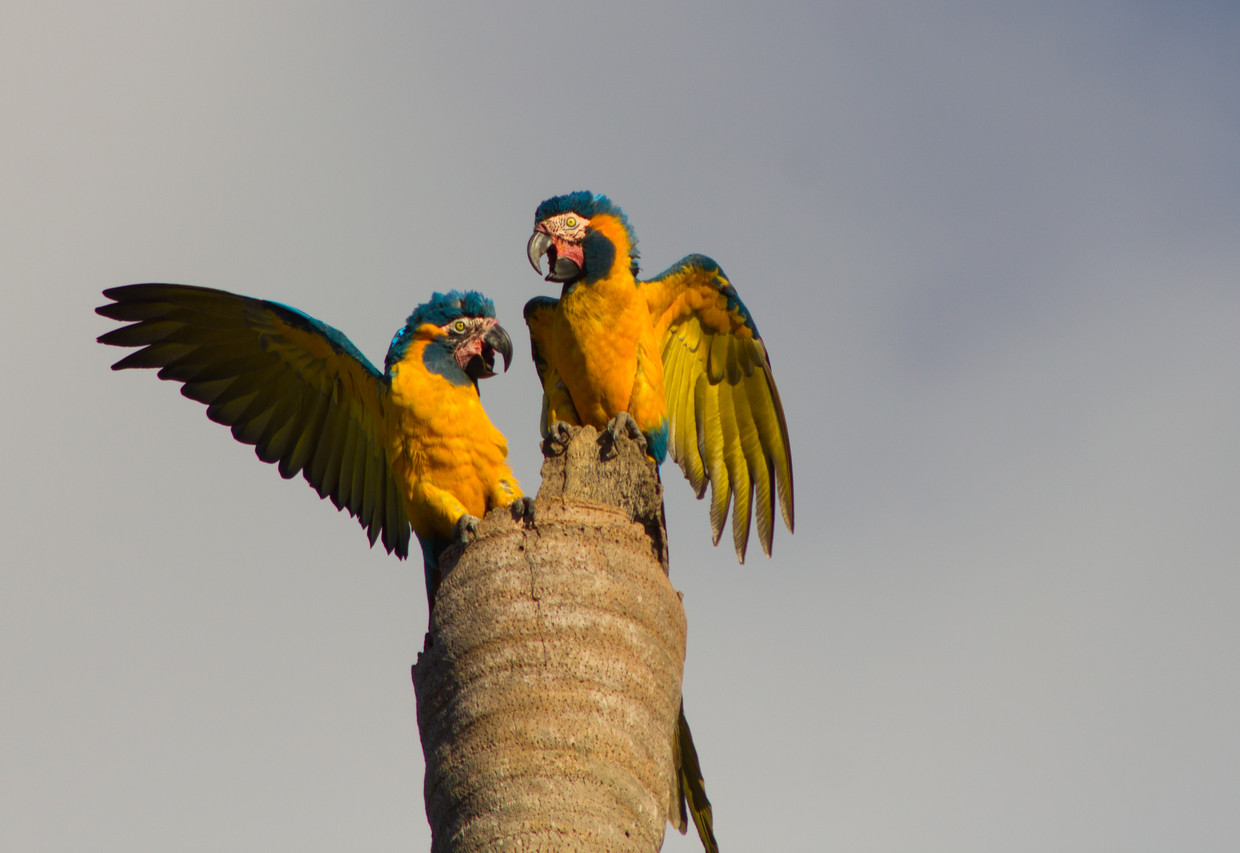 Tjalle Boorsma (35) left for Bolivia five years ago to study tropical forestry and nature conservation. He planned to stay there for only a few months, but he fell in love; with Bolivia, but also with the Blue-throated Macaw, a critically endangered parrot species. Boorsma stayed in Bolivia and in 2015 he discovered 450 individuals of this critically endangered bird species and their habitat.

After his studies, Boorsma started working for Asociacion Armonia, a nature organisation that asks him to run a bird sanctuary.

“The reserve was about 11,000 hectares of savanna habitat; twice the size of De Hoge Veluwe National Park,” says Boorsma through Skype.

Counting the Macaws seemed impossible, but Boorsma succeeded. Every afternoon the birds fly to a small palm island to spend the night, that is their habit. They can easily be counted there, says Boorsma. 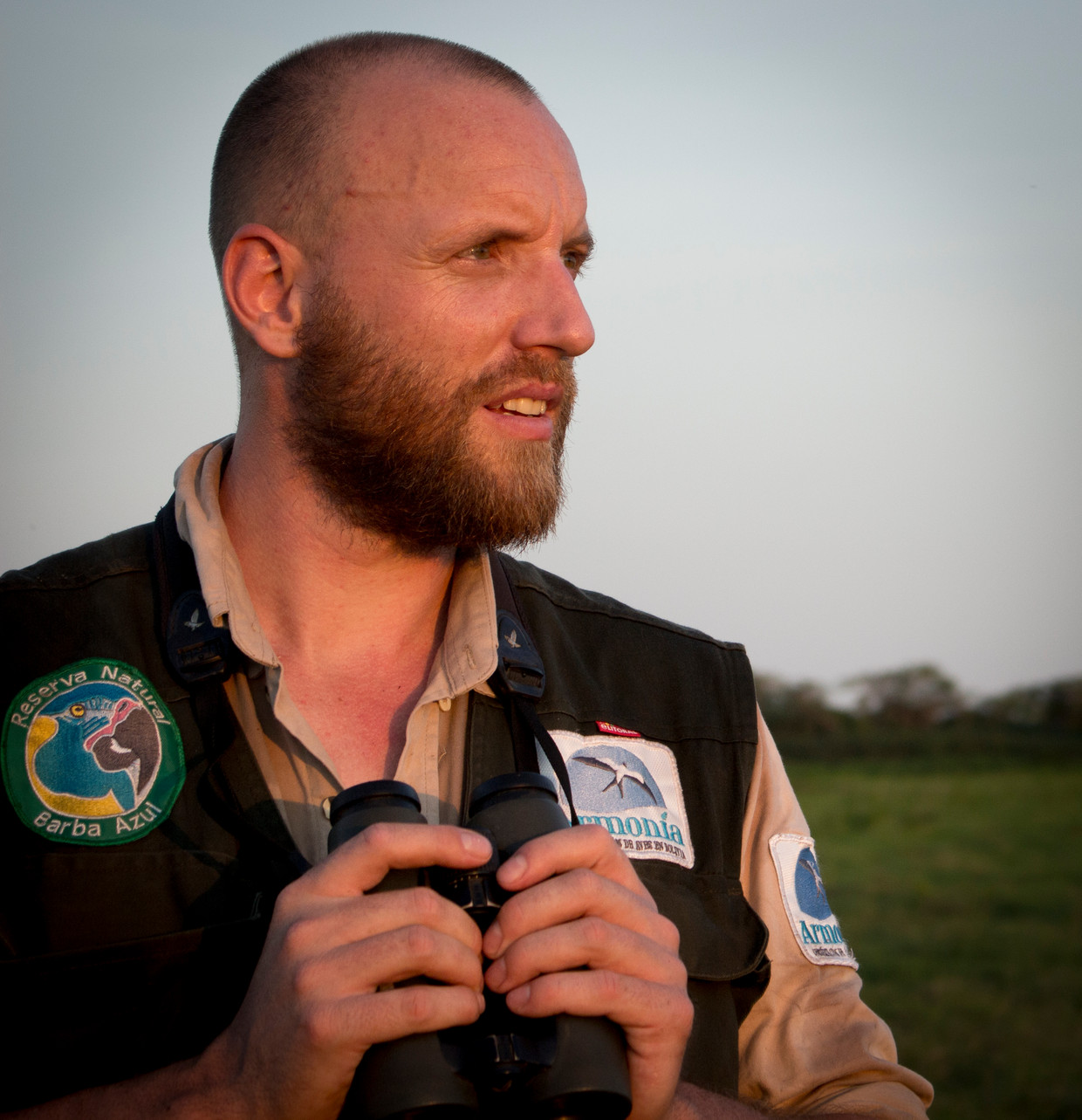 In addition, he got a tip from a farmer, about where the Blue-throated Macaw resides in the thousands of kilometres of savannah, after they leave the reserve in the wet season. Boorsma flies to the farmer with a small aeroplane, after which he searches for the breeding grounds. On horseback, of course, because that is the only way to get around through the partially flooded savanna.

The breeding Macaw is found in the Mauritia palm (Mauritia Flexuosa), a species that does not occur at the reserve. The more common Attalea princeps palm provides food for the bird in the reserve. This gives Boorsma the idea to map out areas where these two palm species occur naturally together, making it easier to find breeding grounds.

With a tent and some food in his backpack, he roams these places on horseback through the savanna for twelve days. Through rain, high temperatures, and mosquitoes. “A lot of mosquitoes”, Boorsma remembers. He finds dozens of nests on this way: the expedition is a great success!

He also discovers the problem of the Blue-throated Macaw: there is no regeneration of these palm trees, which means that the breeding grounds will eventually disappear. Breeding islands are found on ‘ranches’, farmlands of thousands of hectares, where the livestock tramples young palms. In addition, farmers annually burn the savanna grass on their ranches, to prevent it from becoming too high and inedible for cattle. This way, young palms don’t get the chance to survive.

In a country where sustainability does not play an important role, farmers are not enthusiastic about Boorsma’s talk about the Macaw. But they do have ears for a more effective way of working. Boorsma teaches them how to best let their land be grazed, by also safeguarding some areas. Those areas can then recover.

Boorsma expects that the ideas will be accepted: “In the past, the Macaw was hunted for its feathers, which they incorporated in their headdresses. But after offering a fabric alternative, the local population quickly switched.” Moreover, he thinks, the wealthier city dweller would spend some extra money on sustainably produced meat. The next step is to set up a sustainability certificate to improve their working methods.

Boorsma’s collaboration with the farmers was the reason for the jury to reward him with the Future For Nature Award. With the prize of 50,000 euro, he wants to switch more farmers to sustainable livestock farming. Besides, he has set up a project with nest boxes in the hope of providing the Macaws with the habitat to breed in the reserve. “The first test has been successful, and I will expand the project.” 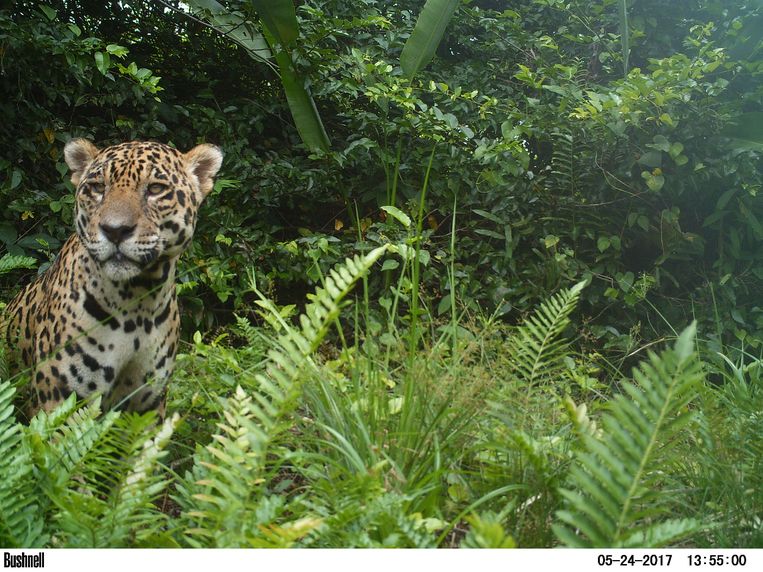 The Jaguar is endangered in Venezuela

Venezuela has been in a political and economic crisis for over fifteen years. María Fernanda Puerto-Carrillo (33) is one of the last remaining conservationists in the country. She works in the state of Zulia, one of the many areas ravaged by armed rebel groups. For twelve years now, Puerto-Carrillo has been committed to saving the jaguar, she founded the NGO Proyecto Sebraba to help the jaguar. Why the jaguar became threatened is highly influenced by the crisis.

The crisis creates wide poverty among local communities. “In order not to starve, they hunt the turtles and the small capybara, a South-American rodent,” Puerto-Carrillo explains via Skype. But these species are also what the jaguar feeds on. Farmers also hunt jaguars that target livestock. In revenge, the farmers go into the jungle at night in search for the killers of their cows. “That hatred is culturally anchored,” says Puerto-Carrillo.

Sharing With the Jaguar

Therefore, she sought cooperation with the community. “In Venezuela, we have lost our connection with nature; we have forgotten that we have an important place in the ecosystem and that we must share that place with animals such as the jaguar.”

To make people aware of this, her NGO has set up an education programme: El camino del jaguar (the path of the jaguar). This collaboration and focus on education are reasons for Future For Nature to reward her with the award.

Also, Puerto-Carrillo continues, “test farms are set up in Llanos for breeding capybara. This guarantees the community its meat without having to hunt for it.” Additionally, a natural barrier between farms and jungle has been devised. By placing buffaloes, an animal that does not appeal to the jaguar, between the jungle and the farm, the jaguar will leave the livestock alone. “Several farmers are making their land available for testing,” says Puerto-Carrillo.

Despite her passion, the crisis forces her hand. Funds and sponsors who are the primary sources of income for her projects, are pulling out. The prize of FFN is therefore more than welcome. As the hunt for the jaguar and its prey is increasingly being practised and certain areas are inaccessible through the presence of rebel groups.

Her NGO is dependent on what Venezuelan paramilitaries, who fight the rebels, allow. “They dominate the community,” says Puerto-Carrillo. “They determine where we can or cannot work. In order not to get into conflict with them, we have to respect that. At the same time, they know where the rebels are, and that prevents us from ending up in dangerous areas. But through connecting the area in which we work with another national park, the two jaguar populations will come into contact, and the numbers will be able to grow faster” she predicts.

The Future For Nature Foundation is a Dutch nature organisation that is, among others, affiliated with Burgers’ Zoo. Due to the corona crisis, this year’s the award ceremony has been postponed until further notice.