Deep in the forests of southeastern Nigeria Iroro Tanshi (FFN winner 2020) discovered ten species previously unknown to occur in Nigeria and published her findings in the journal Acta Chiropterologica. Iroro is the Director of Research at SMACON, a foundation that focuses on the conservation of the small mammals mostly overlooked by others.

The discoveries were made after conducting a four-year survey in the never before sampled area of the Afi Mountain Wildlife Sanctuary and Cross River National Park. These Nigerian forests have long been suspected to hold a large amount of bat species, but lacked research efforts. This is peculiar because the most crucial areas for biodiversity are under-sampled compared to similar areas in other parts of the world. Iroro and her team’s research has proved fruitful by finding species new to the country and thus closing a very important knowledge gap concerning this area. 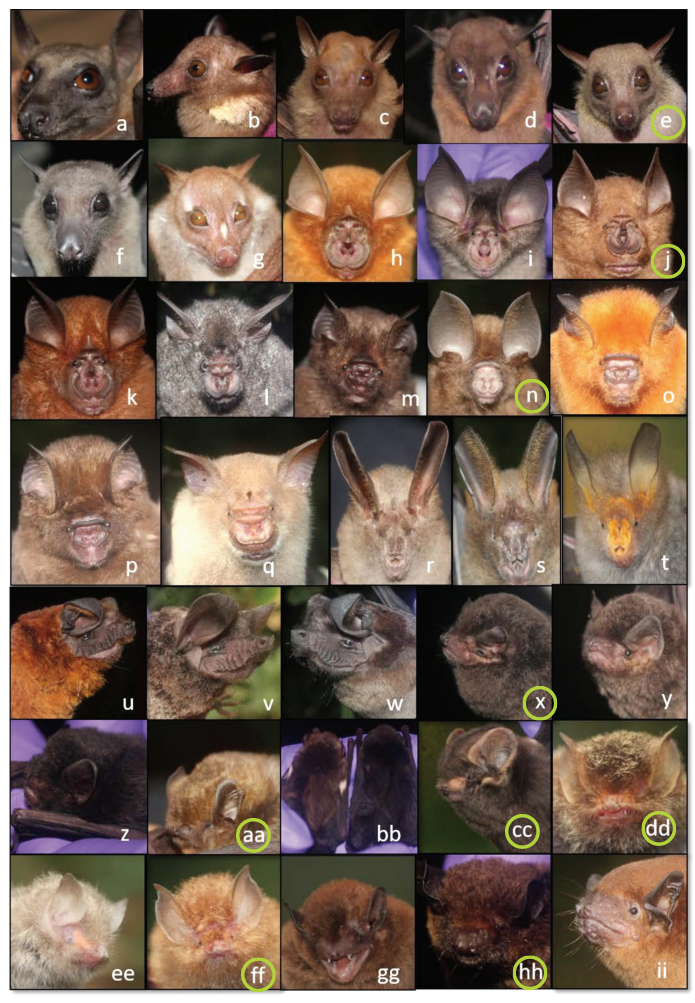 During the field survey, a total of 34 species were captured! The bats with the green circled labels are the newly discovered species.

By using harp traps, which are not a commonly reployed research tool in Africa, and mist nets, Iroro was able to capture the bats that are typically missed in surveys across the region. She was also able to record the echolocation calls of the captured animals to create the first in-country call library. In total Iroro and her team captured 36 different bat species, ten of which proved undiscovered in her native Nigeria. With a previous 90 bat species recorded, Nigeria supports almost a third of the bat diversity known in Africa. This survey has raised the number of bat species known in Nigeria to 100. Read the full scientific article here.

Iroro’s study also discovered the only roost of the endangered Short-tailed Roundleaf-nosed bat at Cross River National Park. She launched a large-scale effort to work with local communities to reduce the risk of wildfire outbreaks and cave disturbance and set up long-term monitoring to conserve this species of bat. She won the FFN Award in 2020 for her efforts in protecting this roost.

all updates
Future For Nature Award Winners 2022!
Award Event 2022
Fighting Wildlife Crime During A Global Pandemic
Monitoring Persian leopards together
15 Years of Future For Nature
Spider monkeys back to freedom in the canopy
First Ever Reintroduction of the Asian Giant Tortoise in Bangladesh: a Model for Future Rewilding Efforts
Announcing the 2022 FFN Award Nominees
Protecting the home of West Africa’s most endangered primates
Connecting citizens to conservation
Bringing Light to Remote Communities
The Connection Between Human Health and Snow Leopards
ANBI number: 8056.52.383 - © FFN 2022 - Future For Nature supports a new generation of conservationists
Privacy statement - Cookies

The three winners of the Future For Nature Awards 2022 have been announced!